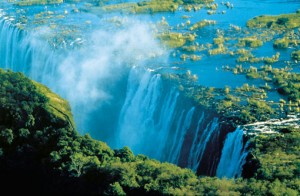 Wildlife, Cape Town, Kruger Park, the Winelands… all these and more evoke the wild and enchanting spirit of South Africa! South Africa offers you magnificent natural beauty in so many different forms, including its wildlife, geography, cuisine, multitude of cultures and, of course, its people. South Africa stretches from the southern tip of the African continent, flanked by the Indian Ocean on the east coast and the Atlantic on the west, and crowned by Cape Town, to modern Johannesburg, to the wonders of Kruger Park at its the northern reaches and all the history and culture it contains.

Botswana is a land of amazing contrasts. Two-thirds desert and Kalahari sand and the Okavango Delta, a baffling mystery which fans out across the north-western region in the Kalahari basin, making a maze of islands, waterways and lagoons teeming with birds and wildlife. In the northeast, the Savuti Channel area, famed for its lions, is truly unique – in the dry season, the game concentration is so vast that one can see 3,000 buffalo at one sitting, a pride of lion 20 strong following the buffalo and wildebeest and zebra in their thousands. Chobe National Park, located in the north of the country, about 80 km from Victoria Falls, where you’ll find an abundance of wildlife concentrated in relatively small areas including great herds of elephant and buffalo for which it is famous.

Zimbabwe is home to many breath-taking places. The magnificent Victoria Falls, named Musi O’Tunya’ or Smoke That Thunders by the locals, are the largest and probably the most beautiful waterfalls in the world! Lake Kariba is a huge inland sea of tranquil and beautiful clear waters surrounded by beautiful mountains and a fascinating variety of wildlife and birdlife. It is also a very popular playground for fishing enthusiasts and holiday on-board houseboats. Hwange National Park, a world renowned conservation area and exceptional attraction, covers over 14,000 square kilometers of bush. The towering walls of Great Zimbabwe are indeed an amazing sight and considered to be among the most extraordinary man-made ruins in Africa! Zimbabwe has been called ‘Africa’s Paradise.

Zambia is a vast plateau. Victoria Falls, at the southern end of the man-made Lake Kariba, are one of the world’s most spectacular plunges: the 2 km (1.2 mi) wide Zambezi River drops over 100 m (330 ft) into a steeply walled gorge; the Zambian side of Victoria Falls provides an entirely separate experience to its better-known Zimbabwean counterpart. In the east and northeast, the magnificent Luangwa and Kafue National Parks have some of the most prolific animal populations in Africa. Lusaka, the capital city, which didn’t exist before the 20th century, is surprisingly rich in galleries featuring local artists. South Luangwa National Park, where the oxbow lagoons act as natural water holes attracting lions, buffalos, zebras and Thornicroft’s giraffes, is home to one of Africa’s largest elephant populations and is particularly noted for its leopards and birdlife, while in the Luangwa River, you’ll spot hippos and crocodiles. Zambia is the true heart of Africa.

Namibia, located in southwest Africa, is best-known by the Namib desert along the Atlantic Ocean coast, indeed, Namibia’s Coastal Desert is one of the oldest deserts in the world, with vast sand dunes, created by the strong onshore winds, considered the highest in the world. Namibia’s shoreline, where the Atlantic’s cold water reaches Africa’s hot climate, is often covered by extremely dense fog which forms along the coast. Despite a seemingly inhospitable environment, Namibia is home to diverse wildlife, including a significant cheetah population. The capital, Windhoek, and the coastal town Swakopmund contain German colonial-era buildings dating to the early 1900’s. In the north, Etosha National Park’s sprawling salt pan draws game including rhinos and giraffes.

Mozambique is about as postcard-perfect a holiday destination as you can get… think crystal blue waters, wide white sand beaches and swaying coconut palms. The Bazaruto Archipelago, a string of small sandy islands including both Benguerra and Bazaruto — habitats for marine animals and havens for visitors seeking unspoiled beauty and some of the best snorkeling, diving and big game fishing in the world. The Quirimbas archipelago, a captivating chain of 27 idyllic islands in northern Mozambique, is now Quirimbas National Park. Providing feeding and nesting grounds for populations of sea turtles, dugong, dolphins, sharks and whales, the Quirimbas have enormous cultural and historical value, with a combination of Arabian, Portuguese, and African influences; the magnificent old fortresses on Ibo Island boast intriguing historical and fascinating sites, with its mangroves, coral and palms and stories of slaves, pirates and ivory. Maputo, the capital, where its Portuguese colonial past adds to the unique Euro-Afro vibe, thumps with a heady Latino beat.

Ask any inveterate traveler: an exotic sojourn by rail is one of the most memorable aspects of a journey. Whether it is a short over-nighter or a two week epic adventure, there is nothing quite so romantic and relaxing as a train ride! South Africa boasts two special rail systems: The famous Blue Train (faster
Read more…

Intimate camps, secluded location and incredible wildlife await you on a Botswana – 5 Days extension. Botswana is true safari country: combine water and land camps and experience it all. Botswana offers its visitors traditional game drives in open vehicles, canoe and boat excursions and walking safaris. Whether you are a first-timer or a safari
Read more…

Consider adding a Cape Town – 4 Days extension to your African itinerary. Cape Town is one of the most gloriously gorgeous cities in the world. Boasting a unique combination of spectacular scenery, vibrant cultures, period architecture and fabulous food and wines, it is no wonder that Cape Town is considered the most enchanting city
Read more…

Depart from your hotel this morning on our Full Day Cape Point tour as you commence your scheduled tour of the Cape Peninsula.  First, you will travel via the 12 Apostles and picturesque Hout Bay to Chapman’s Peak.  This is one of the region’s most dramatic mountain drives and offers amazing panoramic views over the city and environs.  Descend the mountain pass
Read more…

Our Full Day Cape Winelands tour takes you to the Cape’s best wine estates including Stellenbosch, Paarl and Franschhoek. The delightful drive winds its way to the heart of the Cape winelands, through superb mountain ranges, vineyards and Cape Dutch homesteads. The Full Day Cape Winelands tour commences heading north to one of the Cape’s first farming districts – Paarl.
Read more…

Great Safaris Rail / Train Journeys: Rail Journeys of Distinction through Southern Africa Ask any inveterate traveler and they will tell you that an exotic sojourn by rail is one of the most memorable aspects of a journey. Whether it is a short over-nighter or a two week epic adventure, there is nothing quite so
Read more…

Situated below Table Mountain, Devil’s Peak and Lion’s Head, Cape Town offers a rich cultural and colonial heritage, grand splendor and an assurance of activity of excitement. Including all the ‘must-sees’ of Cape Town, our  Half Day Cape Town City & Table Mountain tour is a geographical and cultural extravaganza, showing you Cape Town, from its historical beginnings of yesteryear to the
Read more…

Easily accessible from Victoria Falls, Hwange Park in Zimbabwe is one of the oldest in Southern Africa… some safari aficionados claim that this is the genuine Africa. Hwange boasts a tremendous selection of wildlife with over 100 species of mammals, including large herbivores, and nearly 400 bird species. The elephants of Hwange are world famous
Read more…

South Africa Tour Length: 9 days From $3,995 per person Celebrate “The Long Walk To Freedom” Johannesburg | Cape Town | Greater Kruger Park An extraordinary journey, celebrating an extraordinary life of Nelson Mandela. In Nelson Mandela’s Footsteps is a tour heavy in the cultural highlights of South Africa, while still giving you opportunity to
Read more…