Travel with a Private Egyptologist throughout your journey.

Journey to the Land of the Pharaohs as you float down the grand Nile River for four nights, visiting the temples of Luxor and Karnak, the Valley of the Kings, the temples in Aswan – preceded by nights in Cairo, where you can explore the ancient wonders of the world including the Great Sphinx and Pyramids on our Land Of The Pharaohs tour.

The ‘gift from Egypt to Humanity’ will arrive next year!  Egypt’s Minister of Tourism and Antiquities has announced that the GREAT EGYPTIAN MUSEUM will finally open its doors in late 2022.  Touted as the most famous cultural project in the world,  the massive structure will be the “4th pyramid” of Giza, offering spectacular views of the ancient original pyramids.  The modern structure will represent 7000 years of Egyptian history and contain over 5000 pieces – nearly half of which have never been on public display.  Just one more reason to journey to Egypt…”the land where everything begins!”   Great Egyptian Museum 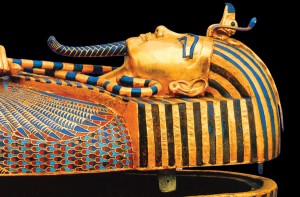 When Howard Carter opened Tutankhamen’s Tomb in 1922, he first made a small hole in the tomb door and looked in. After waiting for some time, Lord Carnarvon grew impatient. “Can you see anything?” he asked. “Yes”, replied Carter. “Wonderful things!”

Egypt, indeed, offers wonderful things for the inquisitive visitor. From the moment one steps onto the busy streets of Cairo, five senses are overwhelmed by the sheer exotic. Exploration in this city of contrasts includes the fabulous pyramids and Sphinx, the Citadel, Sultan Hassan Mosque, the old town bazaars and, finally, the delightful Cairo Museum with its intriguing Mummies Room. 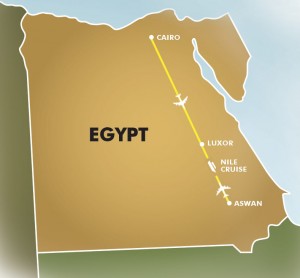 Luxor, picturesquely perched on the shores of the Nile River, is where the adventure goes “afloat”. A five day Nile cruise ship is the best way to explore the temples that were purposefully built on the shore of the holy waters. Each day you disembark with an Egyptologist, discovering the secrets of ancient Egypt: Luxor and Karnak Temples, Valley of the Kings, Kom Ombo, Edfu and Philae.

Land legs are found as the floating resort reaches the end of its odyssey in Aswan. Red rich soil and blowing sands spill down to the rivers edge, where feluccas hoist their white sails. A rewarding end to an epic journey is spent admiring the sites of Aswan, including the Unfinished Obelisk and a boat ride to the see the Philae Temple of Isis now on the romantic Island of Agilika. If you are intrigued by these lands of living history, we recommend an extension to Jordan.

Land Of The Pharaohs Tour Itinerary

You are met by our Great Safaris representative and assisted with visa processing before transferring to your hotel.

Day 2  Cairo
Your introduction to some of the wonders and antiquities begins with two days of private sightseeing with your personal Egyptologist guide. Visit Memphis, capitol of ancient Egypt and one of its oldest cities. Crossing the Nile is Saqqara, site of Djoser’s Pyramid, built during the Third Dynasty and the oldest complete stone building complex known in history. Continue north to the Giza plateau, site of the Sphinx. With the head of a man and body of a lion, this massive limestone structure  is 240 ft from paw to tail  and 66ft high. It is now thought to have been built between 2558 to 2532BC.   The Giza Necropolis also includes the Great Pyramid, the Pyramid of Khafre and the Pyramid of Menjaure. Entry to the Great Pyramid is included for this not claustrophobic.

Day 3  Cairo
Today’s venue includes a visit to the Egyptian Museum or more formally known as the Museum of Egyptian Antiquities and the repository of 120,000 pieces including statues, jewelry, sarcophagi, papyri and other Pharaonic treasures. Next stop is the Citadel of Saladin, once the seat of Egyptian government and residence of its rulers for nearly 700 years.  The final stop is the Khan el Khalili soul in the historic center of the city.  This bustling market, with its labyrinth of alleyways, serves as the go-to place for authentic Egyptian souvenirs.

Day 4-7  (Mon thru Thur) Nile Cruise (4 nights)
Fly to Luxor and board your Nile cruise ship, your floating hotel. Before departing port, visit  the fabulous temples at Luxor and Karnak. Cross the river to the fabled Valley of the Kings. Descend into tombs and delight at the colorful hieroglyphics and ornate sarcophagi.

Visit Edfu Temple, the largest temple dedicated to HorusBoard your luxury cruiser and float peacefully along the fabled Nile. The Kom Ombo Temple is unique as it’s symmetrical double design serves both Sobek, the crocodile god and the falcon god, Haroeris.

Once in Aswan, visit the High Dam, the unfinished obelisk and the Philae Temple, now located on Angilkia Island.  The temple was moved from it’s original island;and site to avoid being flooded with the completion of the Aswan Dam.

Disembark with an Egyptologist to explore the ruins at Kom Ombo, Edfu, including the temple dedicated to the crocodile god, Sobek.

Day 8 (Fri) Aswan / Cairo / Departure
Wing back to Cairo and enjoy time to decompress at dayroom arrangements before a night-time international flight.

Land Of The Pharaohs
*Land Prices for 2023