Daily departure and available as a Private Safari 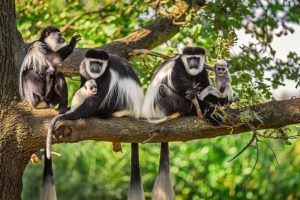 Combining this Rwanda Primate & Wildlife Adventure with chimpanzee trekking, with an optional golden monkey excursion, is highly recommended, for a true primate journey. Wildlife safari is equally impressive, and this tour offers land and boat safaris in Akagera National Park that is in process of becoming a world-class safari destination. Encounter lions, rhino, buffalo, elephant, antelope, zebra, giraffe with an incredible 490 bird species, plus much more.

This overland Rwanda Primate & Wildlife Adventure is the perfect tour for those seeking something different with a deep appreciation for nature and wildlife.

Explore one of the most visited parks in Africa, Akagera National Park,  central Africa’s largest protected wetland and the last remaining refuge for savannah-adapted species in Rwanda. Situated in eastern Rwanda, hugging the border with Tanzania, Akagera National Park covers 1,200 square kilometers and was founded in 1934. The park is named for the Kagera River which flows along its eastern boundary feeding into several lakes the largest of which is Lake Ihema. The complex system of lakes and linking papyrus swamps makes up over one-third of the park and is the largest protected wetland in central Africa.

On arrival at Kigali International Airport you will be met and assisted by a Great Safaris representative and transferred to your hotel.

After breakfast, you will be taken a city tour of Kigali including the visit of the genocide memorial. Your journey will now continue with a 2.5 hours’ drive to Akagera National Park dominated by the labyrinth of swamps and lakes that follow the meandering Akagera River, the most remote source of River Nile.

Spend the afternoon at leisure whilst appreciating magnificent views over Lake Ihema. Ruzizi is a luxury eco-lodge located on the banks of Lake Ihema with its nine tents set back from Ihema’s serene shores and hidden among swaying palms and fruiting fig trees. With a 20-guest maximum, Ruzizi is an intimate retreat. 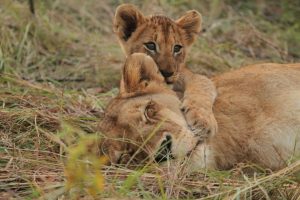 Early morning your safari begins with a game drive in the park led by a trained and specialized guide. The perfect way to learn more about the bush, wildlife and how Akagera National Park has been transformed over the past 20-years.

After lunch you will take a boat trip on Lake Ihema, the biggest lake in the Park, and a highlight of the day!  The lake’s rich biodiversity includes the endangered shoe bill stork, papyrus gonolek and many more beautiful species of bird. In the papyrus swamps surrounding the lakes be on the lookout for buffalo and hippopotamus.

Conclude the day with an early evening game drive where you may encounter lions, rhino, buffalo, elephant, antelope, zebra, giraffe, and many incredible bird species.

After breakfast, you will enjoy your last game drive safari in the park before heading onwards to Kigali for a relaxing afternoon reflecting on you experiences in the wild and preparing for the next leg of your journey filled with primates and forests. 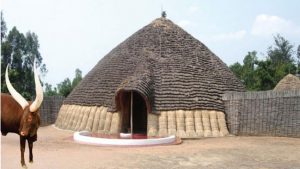 After breakfast you will be transferred to Nyungwe Forest National park and visit Nyanza and Butare, the kings historical Palace, the traditional seat of Rwanda’s kingdom. The ancient palace has been reconstructed to be explored by you. Learn about the evolution of farming and building through the centuries, and then venture into the grounds to meet the long-horned cows, known as Inyambo. They’re beautiful to look at, with a stately elegance you don’t generally expect from cows, until you learn they’re part of the royal heritage, used in many important ceremonies.

After this most interesting stop-over, carry on to Nyungwe Forest National Park with 970 km² of rainforest, bamboo, grassland, swamps and bogs in the majestic hills; it is the largest remaining ‘island’ of montagne forest in East and Central Africa. It is also home to a rich variety of flora and fauna; 200 types of trees, hundreds of flowering plants, over 100 species of orchids and sensational lobelias and 13 recorded species of primates, 25% of the African primate checklist, including the acrobatic Angola colobus that move in troops of several hundred and an estimated 500 chimpanzee.

In the afternoon, you will be taken for a canopy walk in the forest, a most memorable experience. Descend the 40º slant via a zig-zag foot path to the first tower deep in the forest valley for the 1½ hour walk on the Canopy Walk’s suspension bridge. A must do activity!

Arise at dawn to start your chimpanzee trekking experience. These amazing primates are semi-habituated that gives you the opportunity to see them go by their natural activities in the heart of the Nyungwe rainforest; with hilly terrain, high ridges and deep valleys it is a true adventure and requires a good level of fitness. Be on the lookout for other primates including the L’Hoest’s monkey, olive baboon, grey-cheeked mangabey and red-tailed monkey.

In the afternoon, you will be taken for birding. Travel deep into the forest in search of the more than 300 species recorded, including 24 Albertine Rift endemics like the Ruwenzori Turaco among many.

After breakfast, you will be collected by your driver guide and transferred to your lodge that will be your base for Gorilla tracking for the next 2 nights. You will have the rest of the afternoon at leisure, overlooking the great forest that is home to the gorillas. 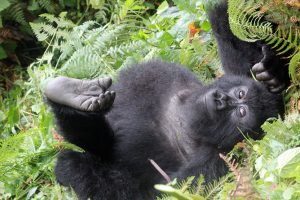 Early morning you will be transferred to the park headquarters for a briefing of your gorilla trekking experience and allocation of your trekking porters. Start your gorilla trekking adventure at the foothills of the Virungas with stirring views in all directions. Upon sighting the gorillas, you will stay with them for an hour as they go about their daily life, feeding, playing and resting. Coming face to face with a giant silverback must truly be one of the greatest wildlife adventures!

Late afternoon, you will be taken for a community walk to see the lifestyle of the Rwanda people 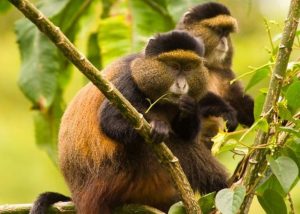 To wrap up this amazing Rwanda Primate & Wildlife Adventure, an activity that is highly recommended is the Golden Monkey trekking adventure. An endangered species living in the Bamboo vegetation towards the base of the Virunga mountains. Return to the lodge for a quick freshening up and then depart for Kigali and on arrival, you will be transferred to the airport for your departure flight.