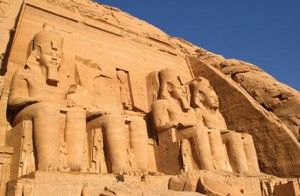 The Pyramids, Jerusalem, Abu Simbel, the Nile… ancient and eternal yet bustling and modern, the Middle East is an intriguing enigma! Cruise the Nile, view the antiquities, enjoy the beach and nightlife in modern Tel Aviv, marvel at Petra or explore the markets and sights of Abu Dhabi, our Middle East Tours explore cultures of the region and cater to a variety of interests. Contact our experts to learn more about our Middle East Tours and plan your trip today.

Egypt is probably the world’s oldest civilization having emerged from the Nile Valley around 5,100 years ago, but today Egypt is much more than its Pyramids and monuments. It is also Red Sea scuba diving, hot night spots, luxury hotels and five star restaurants. It is romantic cruises down the Nile on festive river boats and it is a cultural experience. Egypt is a land bustling with life, sound, visual beauty and excitement. It links two continents, stretching across the north-eastern corner of Africa and the south-western edge of Asia, with a culture that is both ancient and modern.

Israel, a Middle Eastern country on the Mediterranean Sea, is regarded by Jews, Christians and Muslims as the biblical Holy Land. Its most sacred sites are in Jerusalem. Within its Old City, the Temple Mount complex includes the Dome of the Rock shrine, the historic Western Wall, Al-Aqsa Mosque and Church of the Holy Sepulchre and many more. Its financial hub, Tel Aviv, is known for Bauhaus architecture, beaches and nightlife. Other important tourism destinations include Haifa, Caesarea with its Roman and Crusader ruins, Nazareth and Tiberias.

Jordan is where history comes alive and whispers secrets of antiquity to you. Discover Amman – one of the oldest continually inhabited cities in the world. Marvel at Jerash with its Roman architecture dating back 2,000 years and tour the Crusader Fortress at Kerak. Prepare to be overwhelmed at city of Petra, a world-famous archaeological site in Jordan’s southwestern desert. Dating to around 300 B.C., it was the capital of the Nabatean Kingdom. Accessed via a narrow canyon called Al Siq, it contains tombs and temples carved into pink sandstone cliffs, earning its nickname, the “Rose City.” Perhaps its most famous structure is Al Khazneh, a temple with an ornate, Greek-style facade.

Abu Dhabi, the United Arab Emirates’ capital city, sits off the mainland on an island in the Persian Gulf. Its focus on oil exports and commerce is reflected by the skyline’s modern towers and shopping mega-centers malls. On our guided tour, you will explore the ever-changing city and be amazed at the intricate weaving of tradition and modern lifestyles. Learn about the religious foundations of Islamic faith, and admire the architecture and sounds. Get a fascinating insight into traditional life at the fruit and dates market. See the stunning latest attractions on Yas Island on the way to Masdar City, the latest innovation of eco-awareness. Escape the noisy urban environment and experience the calm island waters of Abu Dhabi on board the capital’s largest 74-foot catamaran.

The Middle East is ancient, eternal and intriguing. The cradle of three of the world’s great religions, it offers insight into the ancient world and hope to our modern world. Our Middle East Tours, listed below, offer a variety of experiences in the region; select one or speak with our experts to plan your Middle East Tour.

Enjoy a guided tour of Abu Dhabi. On Great Safaris Abu Dhabi – 4 days extension, you will explore this ever-changing city and be amazed at the intricate weaving of traditional and modern lifestyles of the United Arab Emirates’ capital city. Learn about the religious foundations of Islamic faith, and admire the architecture and sounds
Read more…

Abu Simbel – Full Day extension from $595 per person! This full day extension to Abu Simbel – one of the natural wonders of the world, includes round-trip air from Cairo or Aswan. The Abu Simbel temples are two massive rock temples at Abu Simbel, a village in Nubia, southern Egypt, near the border with
Read more…

History comes alive and whispers secrets of antiquity on Great Safaris Jordan – 4 Days extension. In the spectacular country of Jordan, discover Amman, its capital and one of the oldest continually inhabited cities in the world. Marvel at Jerash with its Roman architecture dating back 2,000 years. Inhabited since the Bronze Age, Jerash is
Read more…

Enjoy Dubai on Great Safaris Dubai – 4 Days extension. Dubai, in the United Arab Emirates, is a city well-known for luxury shopping, ultramodern architecture and a lively nightlife scene. Burj Khalifa, an 830m-tall tower, dominates the skyscraper-filled skyline. At its foot lies Dubai Fountain, with jets and lights choreographed to music. Set on an
Read more…

Jewels of the Emirates – 7 Days

Dubai and Abu Dhabi Tour Length: 7 days Land from $1,395 per person Itinerary Day 1 Arrive Dubai (3 Nights) After completing Customs entry formalities, you are met by our representative and transferred in a private vehicle along the coastline to your hotel for an overnight..  The remainder of the day is at leisure. Day
Read more…

Egypt Cairo | Nile River Cruise: Luxor, Edfu, Kom Ombo, Aswan | Cairo Travel with a Private Egyptologist throughout your journey. Journey to the Land of the Pharaohs as you float down the grand Nile River for four nights, visiting the temples of Luxor and Karnak, the Valley of the Kings, the temples in Aswan
Read more…

The Pyramids, Abu Simbel, the Temples of Luxor and Karnak, Cairo, the Nile… ancient and eternal yet bustling and modern, Egypt is an intriguing enigma! On our safaris visiting Egypt, you can cruise the Nile, journey with your private Egyptologist guide in Cairo, explore the ancient wonders of the world, staying in historically rich cities
Read more…