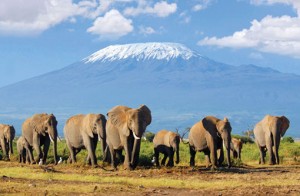 Kenya’s landscapes are rich in diversity, from snow-clad mountain and glaciers to arid deserts, from dry savannah to lush lakes and dense forest. The Great Rift Valley, its floor littered with lakes and extinct volcanoes, cuts through Kenya from north to south. On the Equator majestic Mount Kenya with its snow-capped peaks rises above endless grassland plains. The Aberdares are a beautiful mountain range in the central highlands of Kenya, for the most part, over 10,000 feet in altitude. Amboseli National Park lies below the most famous symbol of Africa, Mount Kilimanjaro at 19,340 feet it is the highest mountain in Africa and the tallest free standing mountain in the world. The surrounding area is flat, covered by savannah and acacia scrub and the animals stand in silhouette against this towering majestic giant, its snow-clad peak floating in the stark blue African sky. Masai Mara National Reserve is situated to the west of Nairobi, on Tanzania’s northern border, and is the northern extension of the larger Serengeti National Park. The Masai Mara offers wonderful scenery and is perhaps the only region left in Kenya where the visitor may see animals in the same super-abundance as existed a century ago. To the west is Lake Victoria, the largest of Africa’s lakes and the legendary source of the Nile. To the South, the Indian Ocean coast offers sandy white beaches, and turquoise seas protected by a fascinating coral reef. Kenya is one of the world’s great holiday destinations.

Tanzania is a stunning country containing a kaleidoscope of landscape, wildlife and people that is infinite in variety. Situated just south of the Equator, Tanzania is the largest East African nation bordered by shimmering lakes and the Indian Ocean; off its white sandy beaches lie the sleepy islands of Pemba, Mafia and exotic Zanzibar. Lake Tanganyika, Africa’s longest and deepest freshwater lake and the second deepest in the world, runs along its western border. In the northwest, in a massive shallow depression, is the source of the Nile, Lake Victoria. Tanzania is also home to the famous vast roaming herds of the Serengeti plains game and the snow-capped wonder of legendary Mount Kilimanjaro. Rising 19,340 feet from the stark flat dry savannah plains, snow-capped Kilimanjaro is a spectacle of pure unadulterated beauty. The mountain owes its existence to the formation of the Great Rift Valley and is actually three volcanic cones, Shira, Mawenzi and Kibo that, due to their proximity, became one; together they make the highest free standing mountain in the world. Between Ngorongoro Crater, 11 miles across and the largest perfect caldera in the world, and Serengeti plains lies the narrow 31 mile long legendary Olduvai Gorge, where some of the most important fossil humanoid remains have been unearthed. The Serengeti, its name coming from the Masai siringet meaning ‘endless plains’, is home to an estimated 3 million large animals within its 5,000 square miles. It is from here that the famous army of grazers begins its legendary trek, the Great Migration, in search of new grazing lands.

Uganda is where the East African savannah meets the West African jungle. In this impossibly lush country one can observe lions prowling the open plains in the morning and track chimpanzees through the rain forest undergrowth the same afternoon, then the next day navigate tropical channels teeming with hippo and crocodiles before setting off into the misty mountains to stare deep into the eyes of a mountain gorilla. Uganda, the “Pearl of Africa”, is no ordinary safari destination.

Rwanda is bordered by Uganda, Tanzania, Burundi and the Democratic Republic of the Congo in the African Great Lakes region. Located a few degrees south of the Equator and highly elevated, with geography dominated by mountains in the west and to the east, with numerous lakes throughout the country, this landlocked East African country is known as the “Land of a Thousand Hills”. Its renowned Volcanoes National Park is THE place for viewing endangered mountain gorillas and golden monkeys. Bordering Congo and Uganda, the park encompasses 4,507 meters-tall Mt. Karisimbi and 4 other forested volcanoes. The mountain gorillas are reached after a trek of 3 to 8 hours up and through the rain forest, which requires that participants should be in good health and able to sustain a slow climbing pace. Such effort earns the amazing reward of seeing these “gentle giants” up-close in their home environment.

Ethiopia, in the Horn of Africa, is a rugged, landlocked country split by the Great Rift Valley. With archaeological finds dating back more than 3 million years, it’s a place of ancient culture. Among its important sites are Lalibela and its 12th-13th century rock-cut Christian churches, and Aksum, the ruins of an ancient city with obelisks, tombs, castles and Our Lady Mary of Zion church. Ethiopia’s capital, Addis Ababa, is a large, modern city celebrated for its many Christian and Muslim sites.

The Seychelles is an archipelago of 115 islands in the Indian Ocean off East Africa, known for its beaches, coral reefs, diving, nature reserves and rare wildlife such as giant Aldabra tortoises. Mahé island, with an international airport, is a key transport hub, home to the capital Victoria, the mountain rainforests of Morne Seychellois National Park and white-sand beaches including Beau Vallon and Anse Takamaka. Heaven for beach lovers, the Seychelles archipelago has resorts and hotels to cater to all tastes. Whether your style is a quaint B&B or a super luxurious resort, the white powder beaches and green-blue waters embrace, soothe and seduce.

Eastern Africa is a land of magical migrations and mountains, unique cultures and people and exotic islands and beaches. Peruse our great Eastern Africa safaris listed below; select one or let them be a starting point for your own safari of a lifetime, our safari experts will be happy to assist you in planning your Eastern Africa Safari.

Kenya Nairobi | Amboseli | Samburu | Masai Mara There is nothing quite like flying above the wildlife between camps and lodges over the wilds of East Africa on our Classic Wing Safari – Kenya. This tour hits three wondrous and unique areas dedicated to game drives and an authentic experience. Tour Length: 8 days
Read more…

Gorilla & Wildlife – Big 5 Safari – 7 Days is an all-in-one destination safari exploring primates, carnivores, antelope, birds and the diverse habitats of Rwanda in Akagera National Park. Quite frankly, this safari is not to be missed! Rwanda is a world famous primate paradise internationally known for Gorilla trekking; which is complemented by
Read more…

.Tanzania Arusha | Tarangire | Ngorongoro Crater | Serengeti National Park The greatest wildlife destinations on Earth… by air on our Great Tanzania Wing Safari! Wing across the savannah, to find destinations, brought to you by Elewana, that give you a varied experience of terrain and game viewing destinations – transferring in the comfort of
Read more…

Save 50% on the second person. Valid on select departures through December 2022.TanzaniaArusha | Tarangire | Ngorongoro Crater | Serengeti National Park The greatest wildlife destinations on Earth… by air on our Great Tanzania Wing Safari! Wing across the savannah, to find destinations, brought to you by Elewana, that give you a varied experience of
Read more…

Tanzania Arusha | Lake Manyara | Ngorongoro Crater | Serengeti Park The Greatest Show on Earth Tanzania Safari is focused on getting you to the most prolific, game-rich areas of Tanzania and follows the best spots to see the great migration. Tour Length: 8 days Since time began, the wild creatures of the vast Serengeti
Read more…

Kenya Nairobi | Samburu | Lake Nakuru | Masai Mara Our Kenya Adventure Safari – Samburu, Lake Nakuru & Masai Mara is a private departure visiting a variety of wonderful environments by road, for a more economical experience. The lodges and parks on this trip are beautiful, unique, and are surrounded by game-rich lands.  This
Read more…

Nairobi | Amboseli | Samburu | Masai Mara From $10,990  per person (plus park fees) The carefully crafted itinerary of our Kenya Flying Safari visits some of the most iconic places and utilizes the services of some of the best qualified local guides throughout the journey. Your care and well-being are the primary concern of
Read more…

Kenya’s landscapes are rich in diversity. Almost every known landform exists within this world in miniature, from snow-clad mountain and glaciers to arid deserts, from dry savannah to lush lakes and dense forest. The Great Rift Valley, its floor littered with lakes and extinct volcanoes, cuts through Kenya from north to south. On the Equator
Read more…

Kenya Safaris | Luxury Safari Vacations | Great Safaris The romance of an African safari was born in Kenya, and our Kenya safaris take you there. Her seductive siren call bewitched such notables as Hemingway, Winston Churchill and Denys Finch Hatton. Kenya’s capital, Nairobi, today is a colorful tapestry woven with many ethnic groups, modern
Read more…

Lands of the Great Migration

Ensuring an unbelievable wildlife experience, our Lands of the Great Migration – Kenya & Tanzania safari travels by both land and air to the absolute best highlights of East Africa. A must for anyone who wants the widest experience of wildlife viewing in Africa. Kenya & Tanzania Nairobi | Samburu | Masai Mara | Arusha
Read more…

Nairobi | Masai Mara Game Reserve | Zanzibar Tour Length: 10 days From $6,495 per person sharing For many people, a safari is a once-in-a-lifetime experience and East Africa is the perfect choice for the ultimate romantic getaway, whether you’re celebrating a honeymoon or anniversary, or simply the joy of spending quality time together. Africa is made
Read more…

Though a landlocked country in East Africa, Uganda has diverse landscapes and abundant wildlife.  Our safaris visiting Uganda take you many fascinating and remarkable places there. Remote Bwindi Impenetrable National Park is a bio-diverse, mountainous area in southwest Uganda. It’s home to many of the world’s remaining mountain gorillas, who feed on roots, leaves and
Read more…