Fairmont Amman is a five star luxury hotel with a prestigious address in the 5th circle of Amman –  centrally located within the city’s best neighborhoods and business center.  Fairmont Amman is a stylish escape at the center of Jordan’s kinetic capital city. Tastefully placed chandeliers, oversized vases of artfully arranged flowers, Arabesque accents, sweeping city views through floor-to-ceiling windows, and splashes of blue, yellow and orange against a beige backdrop create a space that is grand but never gaudy.

The defining characteristics of the Fairmont guest room is its spaciousness, modern luxury and well-thought-out design. The guest room spans a total of 42 square meters of tranquil space with massive windows, showcasing a stunning view of the city landscape. With ultra-comfortable beds and bespoke mattresses, the room also includes contemporary furnishing, Nespresso machines within a premium Refreshment Center, a marble bathroom with separate rain shower and bath tub. A large work desk, high speed Internet connection, interactive 43″ flat screen television, and media panels are also available to ensure each guest a luxurious and comfortable experience.

With seven distinct restaurants, bars and lounges,  Fairmont Amman a dining destination in itself. From an international brunch at Nur to British-inspired afternoon tea at Crystal to late-night sushi at Tsuki, any craving can be sated within the property’s serene sandstone-colored walls.

When it comes time to unwind, an outdoor pool helps you soak up some Jordan sun, while one of the capital’s largest spas is at your fingertips — don’t miss a chance to float in the unique Dead Sea Pool or zone out in the spacious hammam. 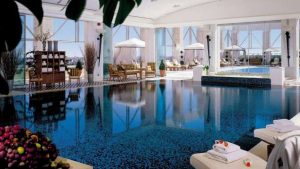 The renowned Marriott Amman 5-star hotel is located in one of the capital’s busiest centers, Shmeissani, with easy access to all historical sites and points of interest and a short distance of 30 minutes from Queen Alia International Airport. 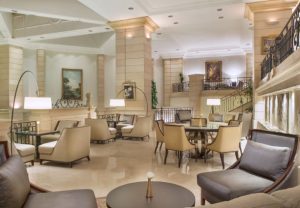 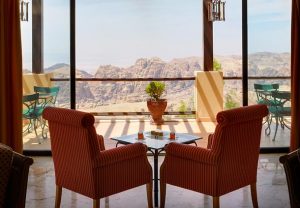 Location: Set in the heart of Jordan’s capital city, Le Méridien Amman is located in the centre of Amman’s Shmeisani commercial business and diplomatic district. A walk away from the Amman Citadel, the Roman Theatre, and many of the city’s malls and shopping areas and a daytrip away from the Dead Sea, Jerash, Petra, and Aqaba, the hotel is an ideal gateway to all that Jordan has to offer. Only a 40-minute drive from Queen Alia International Airport, Le Méridien Amman is an ideal location for business and pleasure.

Accommodation: Le Méridien Amman offers a chic and unique style in every one of its newly-renovated guest rooms and suites. The luxurious sitting and working areas create an inviting atmosphere for you to discover and enjoy.

Facilities: The hotel’s health club features superior spa facilities, including sauna and steam rooms, massage and facial treatments, and indoor and outdoor pools. The hotel’s numerous restaurants and lounges feature cuisine and entertainment from around the world.

The Movenpick is ideally located opposite the entrance to the Petra site. The hotel is a mixture of Arabic and international design featuring an exciting combination of natural stone, handcrafted wood and Middle Eastern fabrics and textures..

There are 183 rooms and suites, all of which have en-suite bathrooms and modern amenities such as TV, air-conditioning, Wi-Fi and tea and coffee making facilities. All rooms also feature a complimentary mini bar. The rooms are modern, however it is worth being aware that modern design in Jordan can still feel somewhat dated compared to other international hotels in the Middle East. The main areas of the hotel are more Arabic in style, including intricate tiles and carved wooden panels and window trellises . The Movenpick Resort Petra has a good range of facilities including an outdoor pool and a fully equipped gym. The hotel has a extensive range of treatments in the spa and you can enjoy the Turkish baths and enjoy a full Hammam experience.

There are a number of restaurants to choose from, ranging from international buffets to candlelit Arabic cuisine. There are some great options for lighter bites, including the Caravan Stop Shop, which offers sandwiches and pastries, the Al Baraka Tea Room which serves refreshments in a cosy setting, and the Al Maqa’ad Bar, with an extensive drinks menu and light snacks.  During summer the Al Ghadeer Roof Garden provides an atmospheric place to enjoy a sundowner and live music.

Location: Located in the heart of Amman’s stately business and diplomatic district, 30 minutes to Queen Alia International Airport plus 3 minutes to downtown and the Roman Amphitheatre.

Features: The Grand Hyatt Amman’s 316 rooms and suites feature the latest in modern conveniences combined with traditional Arabesque ornaments and offer the ultimate in luxurious accommodations.

All rooms are air-conditioned and include a refrigerator, in-room safe, television, coffee/tea maker and minibar. There are indoor and outdoor swimming pools, bar/lounge, several restaurants, business centre and complimentary newspapers are available in the lobby. Also offered are a health club, hair salon, sauna and nightclub. 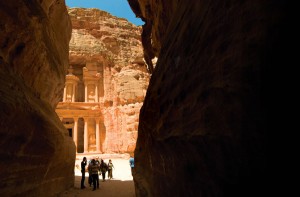