Developer Peet Cilliers wanted the scale of the Legend Golf Course in the Entabeni Safari Conservancy to match the surrounding African landscape.  Everything at Legend is larger than life in an enormous 50,000-acre estate where herds of giraffe, zebra and antelope roam free alongside fairways that weave though open grassland and dense bushveld in two large circuits of nine.  The golf course is designed as an 18 hole championship golf course. It is at once the longest golf course in South Africa, providing all golfers, irrespective of their handicap, the experience of a true African challenge. The course plays at 6,534 metres for daily play but is capable of being extended to 7,748 metres for tournaments, making it one of the longest in the world.

Each of the holes on the Legend Golf Course has been assigned its own “signature designer,” starting with Trevor Immelman at the 1st and ending with Retief Goosen at the 18th. The bunker style has been standardized throughout with no hidden hazards to negotiate. Legend would, of course, have to be the longest course in all of Africa so it measures up at almost 8,500 yards from the championship tee markers. 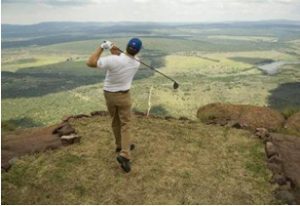 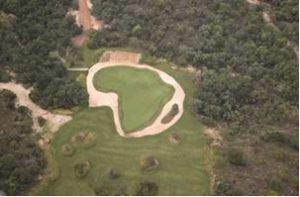 As a very special treat, golfers will be able to play the “Extreme 19th” hole at the Legend Golf Course. Few holes in the history of golf have generated as much interest as the Extreme 19th.  Accessible only by helicopter, with the tee set 400m / 470 yards up on the majestic Hanglip Mountain.  Tee shots from the longest, highest par three on the planet take more than 20 seconds to reach terra firma below to a green that has been contoured in the shape of Africa below.  The Extreme 19th has captured the imagination if golfers like none other in the world.